The Johns Hopkins Uni COVID data was downloaded again on 22 March. This is an analysis of what I found.

The record is of 470 million infections to date, about 6.2% of the world population of 7.6 billions. 104 countries exceed this average of 6.2%, the worst being mostly in Europe. 26 countries have experienced over 30% of their people infected, from Denmark at 54% down to UK at 30.3%. All but four of these countries are in Europe, a continent of many small countries bordering multiple other countries (except the islands). 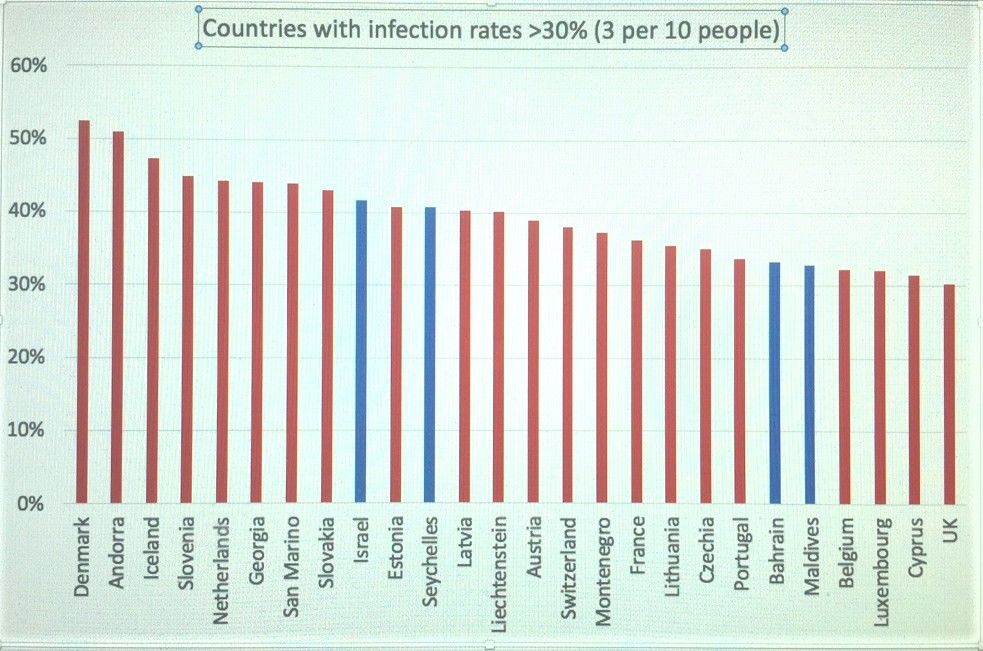 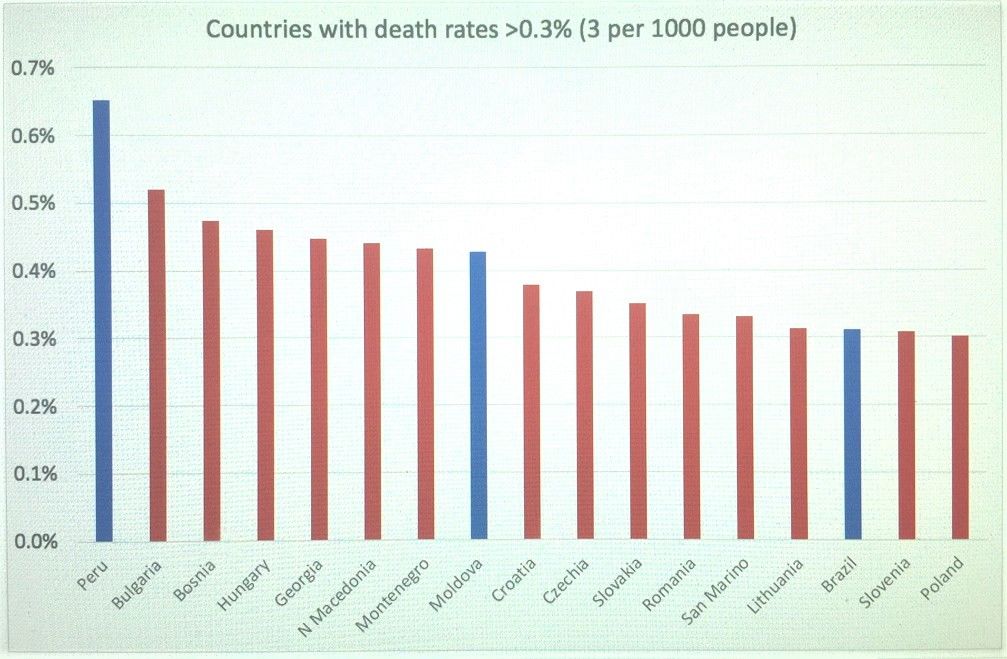 36 countries (of the 187 countries recorded) have each had over 3 millions infected. Their infections total 402.5 millions, or 85.5% of the world total. Australia has recorded 3.9 million cases to date, putting us 23rd on the list. Many of the poorer countries probably don’t have sufficient diagnostic facilities around their countries to generate reliable data, so this is a rough approximation. 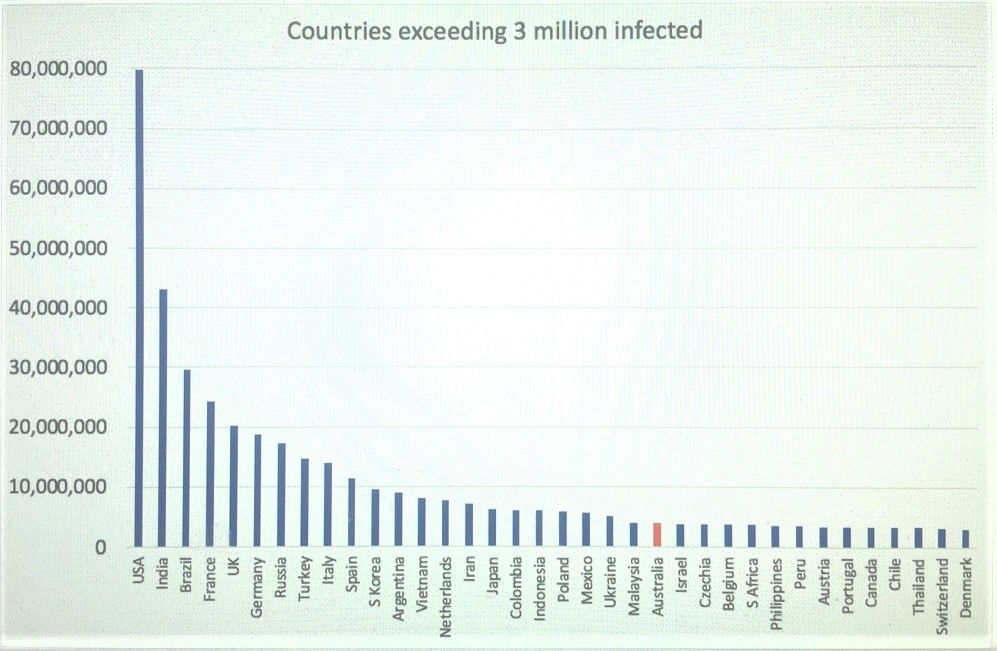 21 countries have recorded over 50,000 deaths. These countries total 4.84 million deaths, 79.6% of the world total. USA has recorded 971,000 deaths, so just this one country has tallied 16% of world deaths, with Brazil and India not far behind. These 3 countries account for over 1/3 of world deaths from this disease. 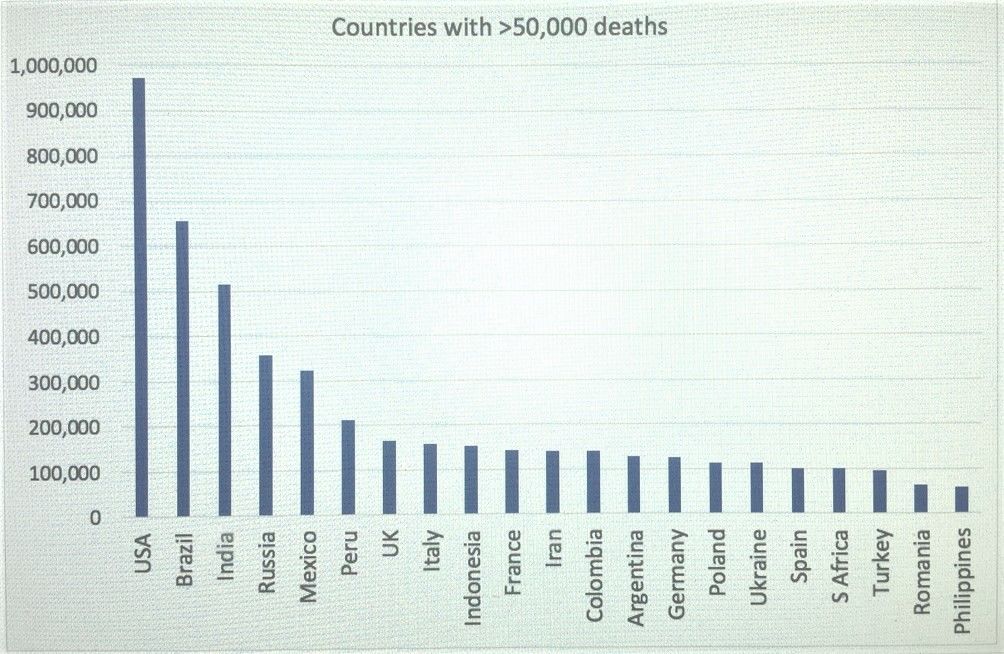 The 37 countries in the OECD, the ones most like Australia, have recorded 276 millions of infections, an average of 20.3% of their population of 1.36 billion, far above the world average. The worst is Denmark which has 52.4% of its people infected so far, just over half. The highest rates are nearly all in European OECD members. Australia’s record is 15.5% of its people, and NZ 10.2%. This is why the Europeans are talking of “living with COVID”, because they already are doing so. 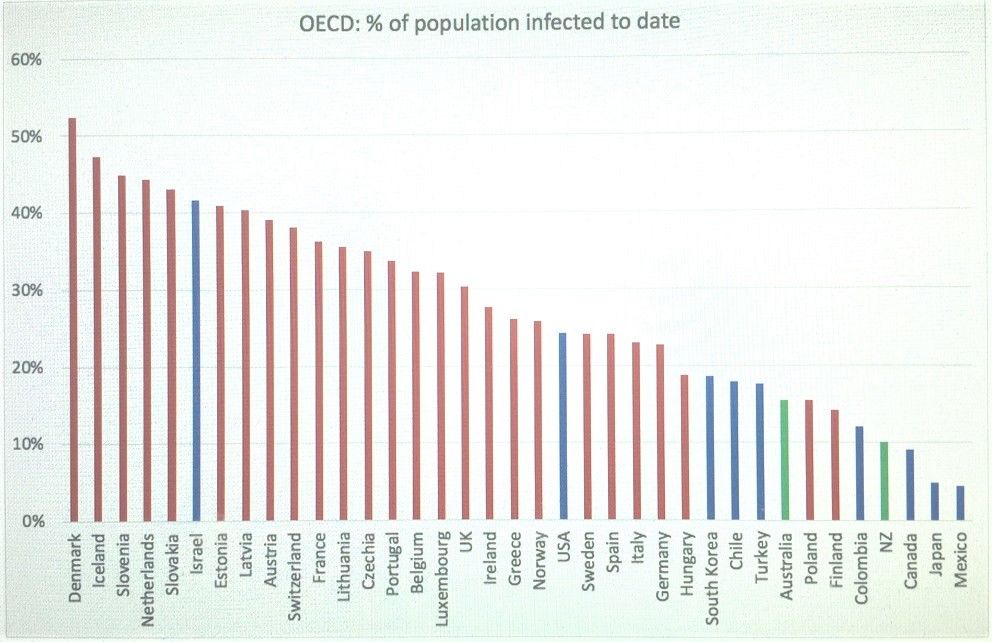 Within the OECD group, there have been 2.77 million deaths, amounting to 0.2% of their population, 2½ times the world average of 0.08%. The worst is Hungary with 0.46% of its people dead of the disease,

followed by Czechia and Slovakia (the two make up the old Czechoslovakia). Australia’s death rate is 0.02% of its population (5,736 cases), and NZ’s is 0.003% (163 cases). Islands have found it easier to protect themselves against the pandemic. 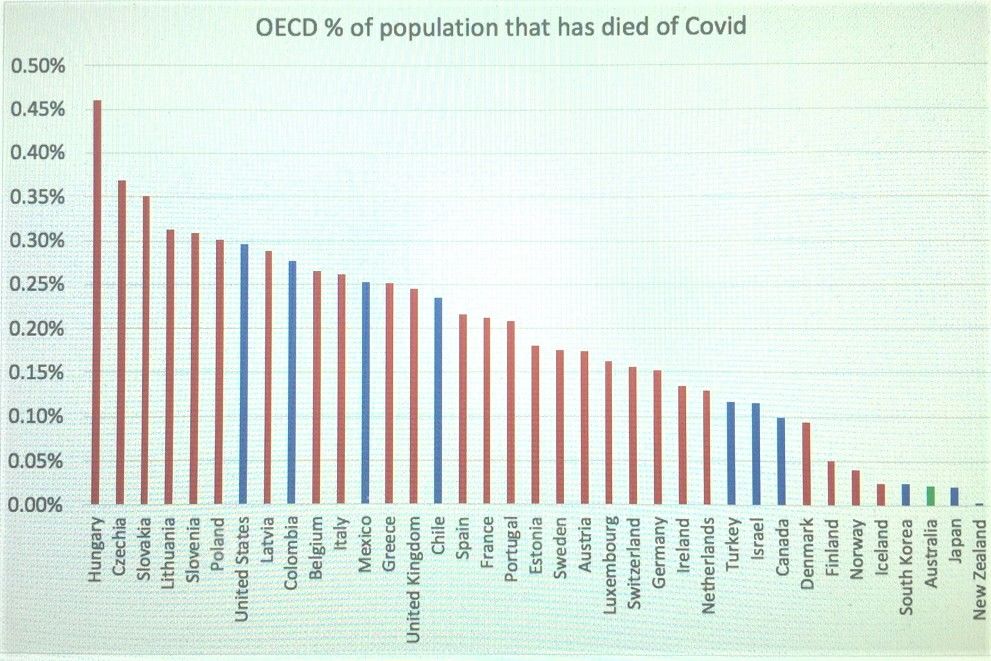 Putting Australia into the context of the world’s experience, we have 0.33% of the world’s people, and have recorded 0.84% of the world’s infections and only 0.09% of world deaths, so we have done relatively well, in proportion to the size of our population.

By contrast, USA has 4.3% of the world’s people, but has recorded 16.9% of the world’s infections and 16.0% of world deaths. Partly they are not an island, partly very toxic politics and the pandemic got caught up in that, partly serious mismanagement of the pandemic, especially during the last year of Trump’s presidency.

But Biden’s first year has not fared much better. In late January 2021, when Biden took office, USA had recorded 25.3 million infections, now risen 14 months later to 79.7 million, just over 3 times as many. And they had recorded 420,000 deaths by then, now risen to 971,000 deaths, 2.3 times as many. Partly they have been through two winters in that period, partly the legacy of the country’s toxic politics and Congress' obstruction of the new government’s programs, and partly the far more individualistic and libertarian culture that makes controlling such phenomena far more difficult for them to tackle.